The Shocking as a Moral Measure

George Takei posted the following picture on his facebook page: 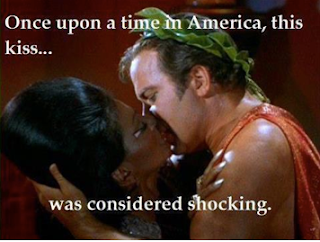 For those who don't know Takei played Sulu on the original Star Trek series. He's been making something of a pop culture comeback these days, appearing in commercials and cameos on various TV shows. Takei is gay and his cameos sometimes play off his homosexuality (e.g., in one commercial he gives advice to a boy making moves on a girl. When the boy asks "How would you know?", Takei replies "I read.") As might be expected, Takei is an advocate of so-called "marriage equality."

What occurred to me on seeing the picture was just what a poor standard "the shocking" is as a measure of morality. When we look to the past, we find that for any time and place, there were things that were found shocking that we don't find shocking now, and other things we find shocking that were not found shocking back then. In other words, at every time in the past there was some aspect of the shocking that did not line up with today's understanding of morality. In yet other words, at every time in the past, reliance on the shocking as an accurate measure of the moral would have been wrong in at least some respects according to current lights. Which leads to the question: What about now? Is the contemporary sense of the shocking the one time in history when that sense maps accurately to the moral? Or is it simply the case that we, like everyone in the past, tend to make the same mistake of making our subjective reaction of shock the measure of the moral?

On the other hand, while we are not shocked at Uhuru and Kirk, we are also not shocked at 1.2 million abortions per year or the fact that 70% of black births are now out of wedlock. (It's 40% for whites, which should be shocking as well, but is tame compared to the black rate). One or two hundred years from now, will people look back on us and wonder how blase we could be about such states of affairs? The fact that we are not shocked about such statistics should at least give us pause that our sense of the shocking is an infallible guide to the moral.


And, increasingly, we are not shocked by same-sex marriage. Although we still seem to be shocked by two men kissing, which - despite Brokeback Mountain - is rarely seen on the screen. Whether or not people tolerate or even "celebrate" it, it seems that most people would rather not see it, and this may be something that never changes.

In any case, the question is not whether we are shocked by same sex relations, but whether we should be shocked, for we should measure our shock by the moral, and not the moral by our shock.
Posted by David T. at 1:39 PM

Socrates for the modern world.

Catholic humanism for an inhuman world

The philosopher and the saint.